And then there were two.

After three weeks of debates, power struggles, schmoozing colleagues, and un-ceremonial Love Island-style ‘dumpings’, Conservative party members are now set to decide the identity of our next Prime Minister. Will it be Foreign Secretary Liz Truss or former Chancellor Rishi Sunak?

Following last night’s final TV debate, voting will begin this week with the result announced on Monday 5th September. The winner will take over as party leader immediately and will head to Downing Street on the same day via a pit stop at the Palace.

The pair, oddly both Philosophy, Politics & Economics graduates from Oxford University, have beaten off stiff competition from the likes of Penny Mordaunt and Nadhim Zahawi and now face the most important few weeks of their lives as they attempt to convince party members (and the wider electorate) of their credentials for the most important job in Britain.

Both face the same issues should they become Prime Minister: the cost of living; spiralling inflation; complicated international trade relations; the ongoing conflict in Ukraine; the potential for further public sector strikes; the climate emergency; and a rapidly developing health and social care crisis.

Crucially, though, both have very different answers about how to resolve these rather complex, and highly contentious, issues. Particularly when it comes to tax, spending and the UK economy.

As well as the economy, one other, slightly less important, theme from this campaign has been the recurring presence of Margaret Thatcher. More specifically, which candidate most closely represents her personality and her financial policies. Both candidates argue that it’s them.

Whilst Sunak delivered a key speech in the former Prime Minister’s home town of Grantham, his rival Liz Truss went a step further and stands accused of actually impersonating Mrs Thatcher in a televised debate.

Whoever they believe, and however much that even matters, it all comes down to the judgement of around 160,000 voters. Their collective decision is one that will affect us all for the foreseeable future.

So, with a little over a month to go until our new Prime Minister is revealed, let’s take a closer look at the final two candidates, assessing them both once again on their economic principles, policies and proposals. We’ll start with the MP for Richmond, Rishi Sunak.

MP for Richmond & former Chancellor of the Exchequer

Voted Leave in the 2016 referendum on EU membership

Rishi Sunak has made it clear throughout this race that his attention, should he win this contest, will be on ‘fiscal prudence’ rather than unsubstantiated tax cuts. He’s not shied away from the economic realities of the challenges we’re facing, urging caution and calmness.

Sunak says he expects inflation to last for at least another 12 months, especially if the conflict in Ukraine – and the actions of the Russian state – continues to affect global food and energy supplies. This rather gloomy estimation is shared by the Bank of England, who anticipate that inflation will reach a whopping 11% before the end of the year, before declining in the New Year. They’ve also warned it could take up to two years before their 2% target is achieved.

Sunak has, therefore, actively sought to play down the prospect of reversing the personal tax increases he introduced earlier this year, at least until after the autumn of 2023. He’s even intimated that he’ll put the UK on a ‘crisis footing’ from day one, should he become Prime Minister.

Furthermore, Sunak has indicated that he intends to continue with plans (that he laid out during his time as Chancellor) to increase Corporation Tax by 6% next year. Corporation Tax is, effectively, an Income Tax on UK companies. It is a direct tax on the annual profits of businesses. Under current arrangements, it is scheduled to increase from 19% to 25% for companies making annual profits in excess of £250,000, which would put the UK behind only France and Canada as having the third highest rate in the G7.

Truss, though, wants this nipping in the bud as part of an immediate, emergency Budget on taxation should she become Prime Minister. Sunak has branded her plans as ‘fantasy economics’ and even accused her of being a ‘socialist’ – a name he’s been called more than a few times himself.

Sunak’s reluctance to propose immediate cuts in taxation is a position that’s been supported by several high-profile economists, though. Speaking to BBC News, the International Monetary Fund’s leading UK official, Mark Flanagan, said that implementing tax cuts which are financed by debt – at this particular time – would be a ‘mistake’. Whilst opponents argue that tax breaks would help people struggling with the current cost of living crisis, as well as encouraging growth through investment, Mr Flanagan actually suggests that such a move could ‘increase inflation’ and limit government investment.

It’s a tough stance that Sunak’s decided to take, warning that any early reductions could act as lighter fluid to already rocketing inflation. It’s a hard sell and it’s a pretty big gamble too. Especially as he tries to win support from the party’s grassroots and red wall voters.

He’s having to tread a careful path and hope that voters respect his pragmatism, recognise his track record (such as his actions on furlough and his role in brokering the new minimum global corporation tax rate), and trust him to handle these generational economic challenges.

Voted Remain in the 2016 referendum on EU membership

When it comes to her economic outlook, Liz Truss couldn’t be further away from her opponent if she tried. For instance, she has emphasised her plans to reverse the increase in National Insurance contributions; to reform public services; to remove green levies from energy bills; and ‘keep Corporation Tax competitive to attract business and investment into Britain’.

The last entrant to announce her candidacy, Truss says it ‘isn’t right’ to be putting taxes up now, and has vowed to cut fuel tax too. Currently, the duty on fuel accounts for 28% of the cost to consumers, with a further 17% in VAT. This has contributed to record prices at the pumps in light of supply issues brought about by Brexit and the ongoing conflict in Ukraine. In Danbro’s recent ‘policy poll’, Penny Mordaunt’s proposal to cut fuel duty by 50% came out well on top, with nearly 60% of voters selecting that as the policy that would make the most difference to them. 23% wanted to lower Income Tax rates, while 14% backed a reduction in Corporation Tax. Interestingly, only 6% wanted to reverse the health and social care levy on National Insurance contributions.

Back to Ms Truss though, and her suggestion that the cuts she’s proposing – which conservative estimates price at around £30bn – will not be paid for through austerity. Nor would they contribute to soaring inflation. Instead, she believes they will deliver growth, ‘increase the supply side of the economy’, and will be accounted for via ‘fiscal headroom’ within Treasury forecasts.

Critics, of course, suggest her economic agenda is careless – dangerous even – and that it could increase debt and contribute to even higher inflation. The Office for Budget Responsibility has said that the country’s finances are currently ‘unsustainable’, and that tax cuts ‘rarely pay for themselves.’ Meanwhile, economist Ben Nabarro, from investment bankers Citi, told the Guardian that Ms Truss’ financial plans could have a profoundly poor impact on the UK economy.

A former Liberal Democrat, including a spell as President of Oxford University Liberal Democrats, Ms Truss joined the Conservatives in 1996. However, despite her centrist beginnings, her allies, many of whom hail from the right of the party like Culture Secretary Nadine Dorries and Brexit Minister Jacob Rees-Mogg, have been keen to stress that her politics is rooted in ‘low-tax principles’. They’ve attempted to promote her as the personification of traditional Tory values (low taxes, small state, and personal responsibility). And, in these early stages, it seems like that message is resonating with this particular electorate.

Despite only creeping into the top two in the final round of MP voting, Truss has commanded a healthy lead in a handful of significant recent polls. She has attacked Mr Sunak’s handling of the economy during his two-and-a-half-year tenure as Chancellor and labelled him as the (not-so-catchy) ‘continuity economic policy candidate’. Burn…

Truss has also hinted that she’ll be taking a firmer line on the Bank of England, indicating tighter monetary policies to help ‘control the money supply’. This is controversial to say the least. The Bank of England has been completely independent since New Labour came to power in 1997. It has had its own policies on interest rates and inflation management ever since. So, any attempt to interfere in its decision-making for the first time in 25 years would be an unprecedented move. 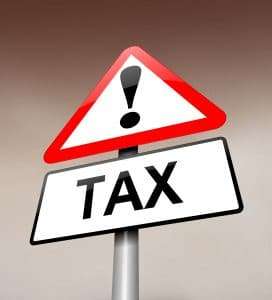 With the final debate taking place last night (Monday 25th July), both candidates will hit the campaign trail hard over the coming weeks in a bid to secure the support they need to get the keys to Number 10.

In the famous words of one fabled Scottish football manager, it’s ‘squeaky bum time’… and it looks like taxation could make all the difference in deciding our next Prime Minister.

The Race for Number 10: How will it affect your Tax?

Add your details below to subscribe to our blog